One way that the project pursues its aims is by bringing groups of scholars together for new conversations.

The Early Illustrated Apollonius of Tyre: Perspectives on the Palimpsest Fragment in Sinai Arabic NF 8

A Workshop of the Andrew W.  Mellon-funded “The Book and the Silk Roads” and the SSHRC-funded “Apollonius of Tyre in Italy”

A research event of The Book and the Silk Roads project (2019–2021) funded by the Andrew W. Mellon foundation, this virtual workshop explores the significance of a recent discovery: an early fragment of a popular Latin romance, the Historia Apollonii Regis Tyri (The History of Apollonius King of Tyre), found in a palimpsest forming part of the manuscript MS Arabic NF 8, in the library of St. Catherine’s Monastery, Sinai, Egypt.

The recent discovery of the Sinai fragment has excited early manuscript scholars and Apollonius experts alike due to its apparent early date: prior to 650CE, and thus several hundred years earlier than the next surviving witness. The fragment is of further interest because it is from a deluxe copy complete with an illustration, confirming long-held suspicions that the early text circulated in an illustrated form.

Our workshop contributors will speak on the discovery of the fragment as well as its scientific imaging, codicological and paleographical features, illustration, and significance for understanding the early history of the codex, as well as what can be gleaned from the fragment about the original manuscript’s production and use. The workshop will also contextualize the fragment’s long life and reuse within the multi-cultural, early monastic setting of St. Catherine’s Monastery — a site that has gained increasing attention in recent years due to the discovery of new texts in palimpsest through the scientific imaging of the Sinai Palimpsests Project.

The workshop is also generously supported by the SSHRC-funded “Apollonius of Tyre in Italy” project, directed by Will Robins, President of Victoria University at the University of Toronto.

For more information, contact the organizers at jessica.lockhart [at] utoronto.ca.

PLEASE NOTE: The Textiles in Manuscripts Workshop has been postponed, and rescheduled from its original dates of May 4-5 to new dates of JUNE 2-3, 2021.
New session times will be posted on the Program page of the workshop website in early May: https://booksilkroadstextiles.artsci.utoronto.ca/

*All current registrants have been sent an email, moving their registration to June 2-3. If you need to cancel your registration, please see the link to cancel within that email.

From the Book and the Silk Roads team:
Canada’s Association for University Teachers (CAUT) recently voted unanimously to censure the University of Toronto (UofT) over a matter of academic freedom. The censure asks that Canadian university faculty boycott the UofT until the censure is lifted. Some faculty outside of Canada have elected to join the boycott. More may do so.  The Book and the Silk Roads (BSR) project is based at the UofT, which is one of the two main sponsors of this workshop, along with The Institute for Advanced Study in Princeton. In light of the fact that no resolution has been reached between CAUT and UofT over CAUT’s recent censure of the University, we regret that we are postponing the Textiles in Manuscripts Workshop to 2-3 June, 2021. We apologize for the great inconvenience. We are optimistic that in a month’s time a solution may be closer at hand.

The aim of this virtual workshop is to examine the vast use of textiles in manuscripts, both practical and ornamental: their uses within bindings, as wrappers, enclosures, and covering, as cloth used to protect images, and as symbolic or talismanic artefacts. Workshop sessions focus on the use of textiles in Armenian, Chinese, Ethiopian, Islamic, Kashmiri, and Syriac manuscripts from the middle ages through the early modern period. The workshop is not meant to be exhaustive, but to take a unique approach in beginning an interdisciplinary conversation about the production and use of manuscripts across the Silk Roads.

The workshop is filling up! Sessions will not be recorded, so register only if you are able to attend.

For more program information, and to access the pre-recorded videos, visit the Textiles in Manuscripts Workshop website: http://booksilkroadstextiles.artsci.utoronto.ca/

Questions in Conservation, May 2020

As specialists working with heritage objects first-hand, conservators are in a unique position to ask questions leading to interdisciplinary and collaborative breakthroughs in the areas of medieval book history, conservation and heritage science, and the protection and study of vulnerable and little-understood material

On May 13, 2020, the Book and the Silk Roads hosted conservators from the Cambridge University Library, the British Library, the Chester Beatty Library, and Universitaire Bibliotheken Leiden to participate in a Zoom workshop with the aim of identifying questions, puzzles, and areas of research interest which may be suitable for the application of non-destructive scientific approaches and scholarly research.

Formats of the Book in East Asia and Environs, November 2019

Co-PI Suzanne Akbari (now at the Institute for Advanced Study) hosted a workshop on November 19, 2019 bringing together researchers from the University of Toronto, Princeton University, and others, for a day of study focused on “Formats of the Book in East Asia and Environs.” The event was jointly hosted by Stephen Teiser, on behalf of Princeton’s Buddhist Studies Workshop, along with funding from the Andrew W. Mellon Foundation (1802-05532). The day began with a survey of manuscripts and early printed books at the Firestone Library, led by Martin Heijdra, Director of Princeton’s East Asian Library. Images from the exhibition are featured in this blog post by Julie Mellby; see also the IAS's press release here.

The morning session on early book forms of East Asia, including fragments from Turfan and documents from the "library cave" in the Mogao complex near Dunhuang, was followed by presentations on The Book and the Silk Roads project by co-PI Alexandra Gillespie (UofT) and on collaborative research with the Royal Ontario Museum by UofT's Amanda Goodman and Jessica Lockhart, as well as a survey by Princeton’s Stephen Teiser of the Luce Foundation-funded project “Dunhuang Art and Manuscripts” (2014-18). 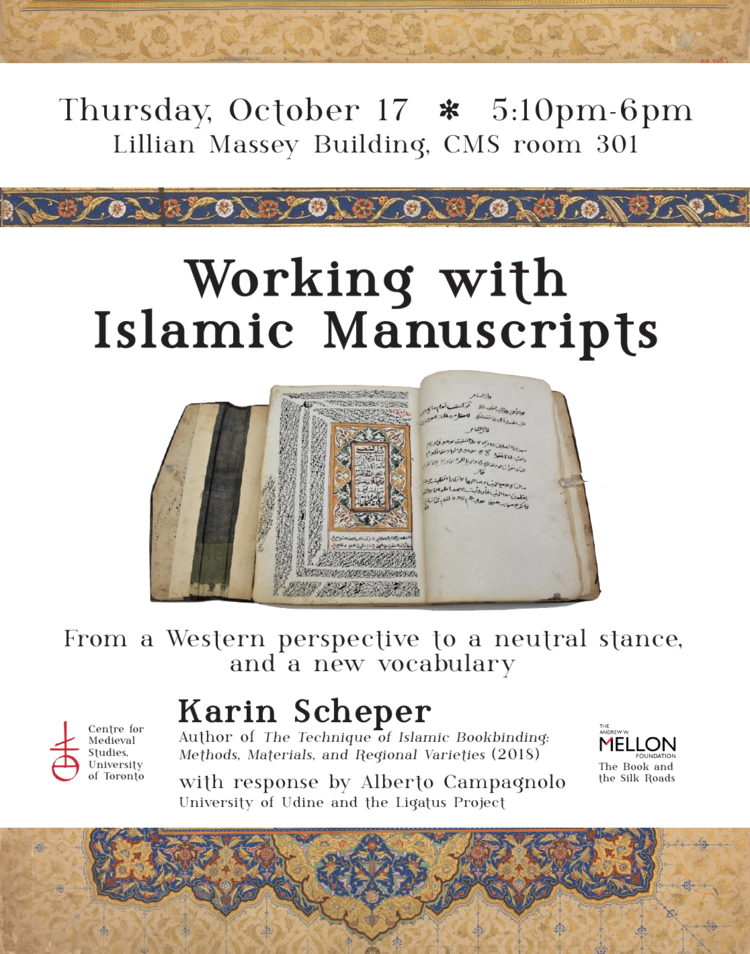 Conservator and bookbinding scholar Alberto Campagnolo (Udine) led a workshop about appropriate schemas for conducting transnational, transcultural manuscript studies. Conservator Karin Scheper (Leiden) worked with some of our collaborators at the Aga Khan Museum in October. She delivered a lecture at Toronto’s Centre for Medieval Studies on October 19, 2019, "Working with Islamic Manuscripts: from a Western Perspective to a Neutral Stance, and a Vocabulary to Reflect This," with a response by Alberto Campagnolo. Our project is indebted to Scheper's The Technique of Islamic Bookbinding 2nd ed (Brill, 2018)

New studies on material aspects of manuscripts from the Islamic world have changed our understanding of this manuscript culture and its larger role in the development of bookmaking techniques. As a result, we must also see the Western tradition in a different light and question our vocabulary when we talk, write and teach about these objects. This talk discussed misunderstandings that evolve from the lack of proper terminology, and presented ongoing work to address this problem.

Toronto’s Centre for Medieval Studies hosted Medieval Ethiopia: A Second Colloquium with a particular focus on manuscript studies, coordinated by Book and the Silk Roads co-PI Suzanne Akbari, on October 11-12 2019.

Ethiopia was a key point of contact both during the early Middle Ages, with the kingdom of Axum serving as an important trading partner that linked the Roman-dominated Eastern Mediterranean with Indian Ocean trade routes, and during the later Middle Ages, when the Solomonic dynasty emerged as a regional power in the Horn of Africa. Connectivity––extending north and south, to the Mediterranean and Indian Ocean, and eastward into the Horn of Africa––is a key feature of our research on Ethiopian craft practices, as witnessed by the rich codicological traditions of the region.